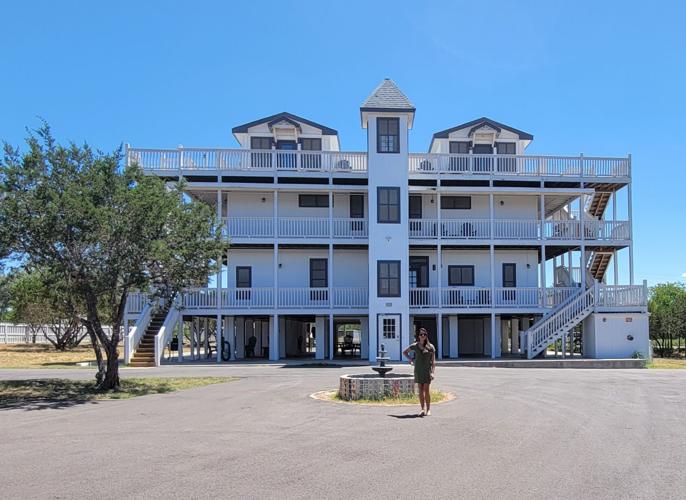 River Ranch Inn on the San Gabriel River is now open to guests under new ownership.

Each two-bedroom unit is equipped with a kitchen, each one uniquely decorated.

Original artwork from the Casa Rio de Colores, which is part of the River Ranch Inn property on CR 279.

A main attraction at the River Ranch Inn is the cool water of the San Gabriel River where guests can swim or just enjoy lounging on the shore. Amber Daniel, owner of the inn recently took The Independent on a tour of the property.

River Ranch Inn on the San Gabriel River is now open to guests under new ownership.

Each two-bedroom unit is equipped with a kitchen, each one uniquely decorated.

Original artwork from the Casa Rio de Colores, which is part of the River Ranch Inn property on CR 279.

A main attraction at the River Ranch Inn is the cool water of the San Gabriel River where guests can swim or just enjoy lounging on the shore. Amber Daniel, owner of the inn recently took The Independent on a tour of the property.

When Amber Daniel opens any given door at the River Ranch Inn on County Road 279, she’s used to hearing audible gasps from whoever is with her. That’s because each of the inn’s eight units is uniquely and eclectically decorated—and pays homage to the whole “Keep Austin Weird” motto in a Liberty Hill setting. Plus, from the outside of any of its three floors, sweeping views of the San Gabriel River just add to the awe.

The inn and its surrounding property was purchased by Daniel and her husband, Grady, in late 2021 from the original owner, well-known Austinite Jenna Radtke, who has owned Austin’s most iconic costume shop, Lucy in Disguise with Diamonds, on South Congress Avenue since the mid-1980s.

Radtke purchased the 18 acres that sit just adjacent to the San Gabriel River in the early 1990s and built it up a little at a time.

Weddings started to become very popular there, so Radtke moved another house onto the property a few years later, which she called The Inn at the Blue Hole. The Victorian-style home was moved in two pieces from Lexington, Texas, and was also placed on beams due to the flood plain. Radtke remembers the weddings she hosted at the property best.

“I would keep in touch with people who had weddings there, and then they’d want to come back on their anniversaries,” she said. “The inn attracted a certain kind of person, like the ‘Keep Austin Weird’ people, because that’s just what it was. I remember hosting a New Orleans-style wedding once, and a carnival wedding another time with a carnival troupe from Europe.”

Radtke is a self-proclaimed eccentric—but without her unique take on décor and her one-of-a-kind costume shop, the inn may have never come to be so eclectic.

“I’m just a crazy decorator—I was born that way,” she said.  “The thing about costume rentals is they age on the racks, but they have really cool fabrics. I had all this extra fabric I didn’t want to sell, so I made panels out of it and used it in the rooms at the inn. That’s just the way my mind works. There’s a jungle room and a hippie room and all kinds of themes going on, and all the themes came from the fabric.”

Radtke still has a home in Austin but has moved to New Mexico full time. At the end of this year, she is closing Lucy in Disguise and selling the property.

“I will always keep my house in Austin, but I love living in the mountains so much and I couldn’t stand the heat anymore,” she said. “I got out here and it’s just perfect for a 74-year-old woman.”

After purchasing the property from Radtke, the Daniels spent about six months upgrading it, and officially reopened to the public in May under the name River Ranch Inn. The Daniels live on acreage directly behind the property, which is one reason they wanted to make sure the integrity of the land remained.

“What really prompted us to buy this was not just as an investment, but we own the land behind this, so this is attached to our land,” Amber said. “We thought if we didn’t buy it, who would, and what are they going to do? Everything is growing in Liberty Hill. It would be a shame to see this turn into more housing.”

Amber added that they wanted to keep Radtke’s original décor in each of the rooms. They upgraded several of the amenities, like adding new mattresses and linens as well as a few furniture pieces, but as far as the art on the walls, ceilings and floors, it’s all original. Amber said Radtke’s vibe is just “old school Austin” and that’s what is appealing about all the units in the inn.

“In every single room, every single thing has been thought about,” she said. “I can’t wrap my head around how much work she did. You can’t replicate this kind of décor. There is purpose to everything she does. And every time you come in a room, you find something different.”

The outside of the inn used to be painted a myriad of bright colors, but when the Daniels took over, they decided to paint the entire exterior a bright white.

“We just wanted to make it a surprise,” Amber said. “It’s still funky on the inside.”

Most of the Daniels’ energy has been put into the grounds by the river.

4 Ways to Limit Your Holiday Debt

“We took out a lot of cedars and other invasive plants and cleaned up the trees and made them more beautiful,” Amber said. “We added irrigation and 167 pallets of sod, as well as sidewalks. It was a lot of work.”

Along with sidewalks, they installed park picnic tables and park barbecue pits right next to them. Hammocks are hung throughout the trees that are lit with string lights at night.

At the river, guests can kayak, paddleboard, swim and fish for bass, catfish and perch. From a wooden deck complete with a unique waterfall crafted by Radtke on the banks, guests can use a ladder or rock stairs to enter the water. There are also nearby bathrooms and showers for people to use while hanging out by the river.

Additionally, Amber said she wants people to know that swimming at the “blue hole” in the river was never public, adding that Radtke tried to shut it down once and the trespassers retaliated by vandalizing her property.

“After that she just let it go, but at the end of last summer Williamson County came in and shut it down because there were lots of fights breaking out and people getting hurt,” she said. “We have gotten some hate on social media from closing it, but it’s never been public. Williamson County asked us and surrounding properties to help them keep it under control. And now that we own this, we don’t want fights and all that happening.”

There is also a gazebo and outdoor fire pit, which Amber said may be used in the future for community events, but for now it’s not in the plans as the inn itself is keeping her and Grady busy enough.

“We saw this bamboo forest happening randomly on the grounds, so we decided to leave it and created a path,” she said. “In the middle of the bamboo we created a fire pit with seating where people can congregate and hang out and do s’mores and kind of feel like they’re in a different world.”

The inn itself consists of eight units, each with two bedrooms, a bathroom and a fully functional kitchenette. It also boasts a dumbwaiter exclusively for luggage to go up and down to the different floors so visitors don’t have to carry their suitcases up and down the three levels of stairs.

The Daniels also added electric burners, coffee makers and air fryers to each of the kitchenettes to make them even more user friendly for guests. Underneath the inn, where the beams are, is an outdoor seating area, barbecue grills and outdoor games like cornhole. There is also a washer and dryer on site for guest use. Prices range from $157 to $200 per night.

The building previously known as Casa Rio De Colores needs to be totally remodeled and isn’t currently open, Amber said. The foundation and beams are stable, but the rest of it will be completely transformed.

“That structure will be more modern for the rest of the people that don’t want that eclectic vibe from the inn,” she said.

That building will also have eight units with two bedrooms per unit. The timeline for the project is still fluid, Amber added, but they hope to have it ready for guests in 2023.

Radtke admits it was hard to give up her Liberty Hill property, but she is grateful the Daniels are the family she sold to.

“They love it just as much as I did,” she said. “They went back and forth about keeping the crazy décor, but decided they’d try keeping it. I’m glad they’re keeping it and taking care of it. It was hard to let it go, but I let it go to people who love it.”

The inn is open to guests seven days a week and is also open for weddings and family reunions.

“I don’t advertise it as a wedding venue but can rent the space and have your own people come in and do your wedding,” Amber said. “And as a child, I remember family reunions were like this. It was going to a place where there was a river, and you’d rent out a space and everybody would come. This is kind of like a full circle thing. This is what I want for people. This is what people need—to slow down. People don’t do that enough. We have the space and I want to share it, not just because it’s my business, but because it’s important.”