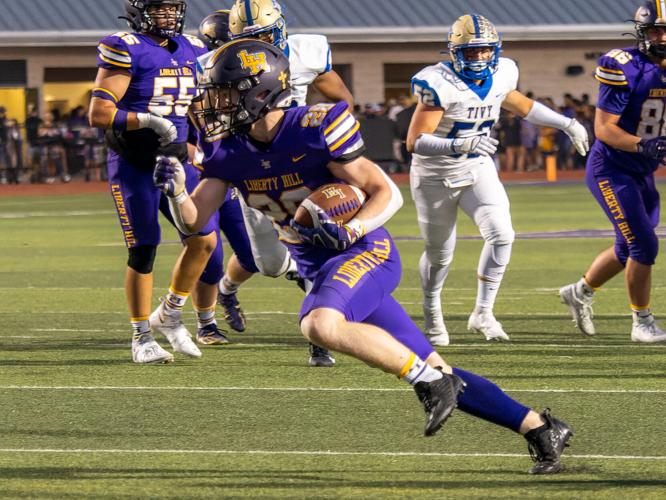 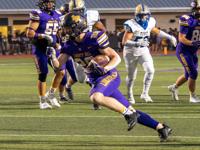 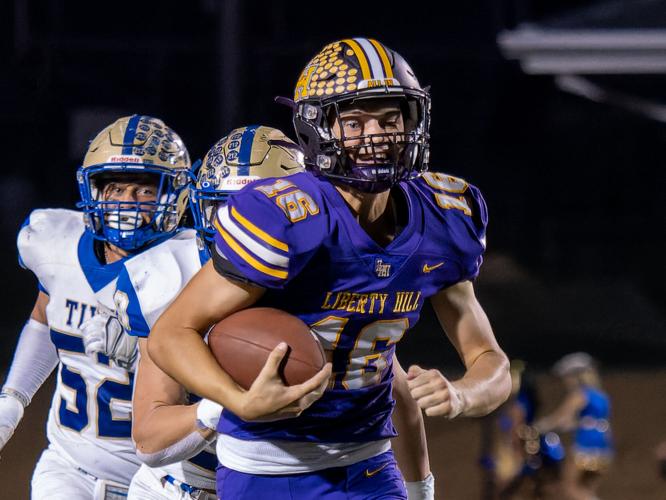 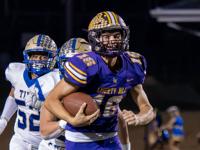 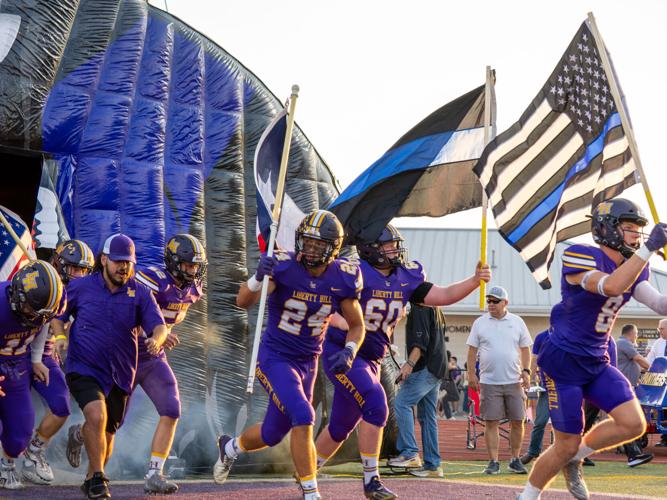 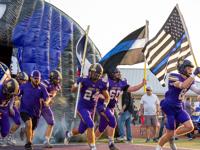 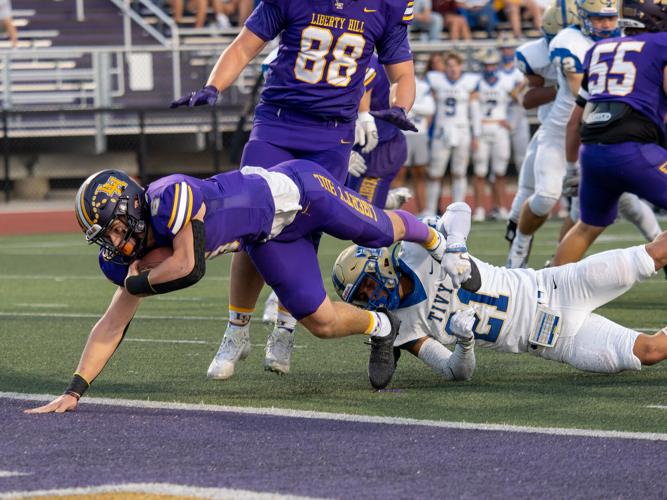 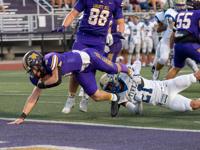 Halfback Joe Pitchford (6) lunges across the goal line for a touchdown in Liberty Hill's 63-6 home district win against Tivy on Friday night. 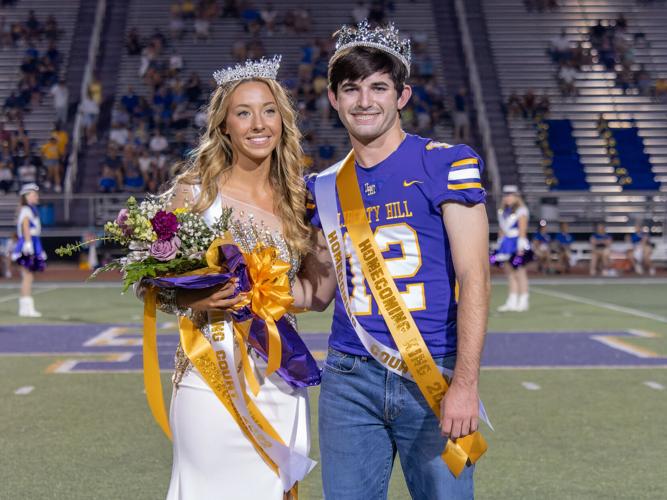 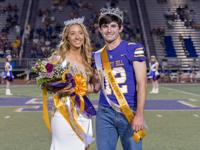 Halfback Joe Pitchford (6) lunges across the goal line for a touchdown in Liberty Hill's 63-6 home district win against Tivy on Friday night.

If Liberty Hill's football team had been hunting at Panther Stadium on Friday night, it would've bagged itself quite a buck in its 63-6 dismantling of Tivy in the district opener, as the home side collected a rack of Antlers even the most experienced outdoorsman would be proud of.

Ben Carter rushed for 174 yards on nine carries with four touchdowns to lead the Purple-and-Gold to a rout of the visiting Kerrville squad on a night when the Liberty Hill offense rolled up 505 rushing yards in as complete a performance as the Panthers have had this season.

“It feels good,” said Liberty Hill head coach Kent Walker, on his team's performance. “We scheduled a really tough non-district, came out of it somewhat healthy and tonight we were able to play fairly well, but I still feel like we have a long way to go.”

Carter, who was elevated to the starting fullback role when senior Logan Dyer was lost for the season with a shoulder injury, averaged 19.3 yards per carry by time and again gashing the Antlers' defense right up the middle, including scoring runs of 21, 40, 44 and 35 yards.

According to Carter, his job was made easier on the evening by the presence of his pair of more-heralded backfield mates in addition to a solid offensive line.

“When people start to concentrate on (Liberty Hill running backs) Noah (Long) and Joe (Pitchford), it opens things up for me,” said Carter, who had only appeared in one varsity game before this season. “Also, our blocks are getting better every week and opening up bigger holes.”

A bit undersized for a fullback at 5-foot-10, 160 pounds, Carter said he used that to his advantage in slipping through cracks in the Tivy defense undetected.

“My size allows me to hide behind the line sometimes,” he said. “It makes me hard to see.”

Walker said it wasn't a matter of if – but when – Carter would light up an opposing defense.

“We've been anticipating Ben having a breakout game and it just so happened it was tonight in the first district game of the season,” he said. “Proud of him – he ran well and our offensive line opened up some really big holes for him – he wasn't touched for the first 10 yards of most of his carries – but it was a great game by Ben overall.”

Previously, Carter's high for the season was the 106 yards he compiled in the Panthers' 56-49 road loss to Hutto.

Carter scored his first six points of the proceedings after Pitchford had opened the scoring with an eight-yard scoring run and the Panthers led, 14-0, after one quarter.

Curiously enough, Tivy twice gambled by going for it on fourth down in the opening 12 minutes, the first time on its opening possession on its own 43-yard-line on the game's opening series and again later in the period after driving to the Liberty Hill 15 at the end of a 14-play, 60-yard drive, when the Antlers eschewed a field-goal attempt only for quarterback Kale Lackey to loft a pass incomplete on 4th-and-11.

Tivy abandoned the run early, attempting 10 passes on its first two possessions to no avail.

Following the turnover on downs, Pitchford sprinted down the left sideline on the next play from scrimmage on a 46-yard rumble that included barreling into a Tivy tackler and carrying a pair of Antlers another 10 yards after contact before finally being wrestled to the ground by a host of defenders.

After yet another failed fourth-down attempt by the visitors, it only took six plays for the Panthers to once again cash in on Tivy's overzealousness as Long scored his second of the night from 12 yards to make it 28-0.

Once Carter scored again on a 40-yarder right down Broadway to increase Liberty Hill's lead to 28-0, the Panthers' defense took its turn in the spotlight.

Wyatt Sprinkle and Andrew Hardy-McLeod combined for a sack of Lackey for a loss of six on first down, then Tanner Cearley threw a Tivy ballcarrier for a four-yard loss before Ryan Jacobs did the same for three yards, which set up 4th-and-9 at the Liberty Hill 31-yard-line.

Lackey completed a pass to fellow senior Jake Layton, only for the Antlers wideout to be stopped just short of the marker despite an outstretched arm and ball that missed by inches.

It was that kind of night for the visitors, only compounded by Pitchford's second score of the half on a 21-yard run to make the halftime score 35-0.

Much more of the same

As the second half got underway, it took the Panthers all of 60 seconds to once again increase their lead.

Pitchford and Long ran for 14 and 10 yards, respectively, before Carter busted loose into the Tivy secondary for his longest jaunt of the night, a 44-yarder to the end zone and a 42-0 lead.

Tivy then moved from its own 25 to the Panthers' 21 when Liberty Hill's secondary contributed to the cause as senior cornerback Aden Burrell intercepted a Lackey pass in the front-right corner of the end zone to keep the shutout intact.

Walker praised Burrell for his continued dogged defensive efforts and was happy to see him rewarded.

“For Aden to get that interception in the end zone was a big play for him,” he said. “He had great coverage tonight – he always has great coverage – so for him to go up and make a play like that will build for him.”

Liberty Hill then scored twice more in quick succession – with one from each side of the ball.

First, Carter scored his fourth of the night on a 35-yard run, then Hardy-McLeod recorded his second sack of the game, causing Lackey to fumble near the goal line, which was pounced on in the end zone by linebacker Samuel Knox for six and a 56-0 lead.

Tivy desperately wanted to avoid a whitewash on the scoreboard and was finally able to remove the donut with a one-yard run by Logan Edmonds with 10:41 remaining to ruin the Panthers' shutout bid.

But, even that went wrong as a two-point conversion run attempt failed.

Late on in the game, Panthers junior Jaxson Hines entered the contest and carried the ball four times for 31 yards, including his first varsity touchdown on a one-yard run to close out the scoring.

Another junior, Luke Miller, also saw action, but had a scoring run of his own nullified by a holding call.

In addition to Carter's heroics on the night, Pitchford rushed for 133 yards on seven carries, while Long had 98 yards on six attempts and quarterback Reese Vickers ran for 61 yards on five rushes, including a 46-yard gallop late in the first half.

However, despite the Eagles' winless start to the campaign, Walker had a stern message to his players before they even took the field against Tivy this week.