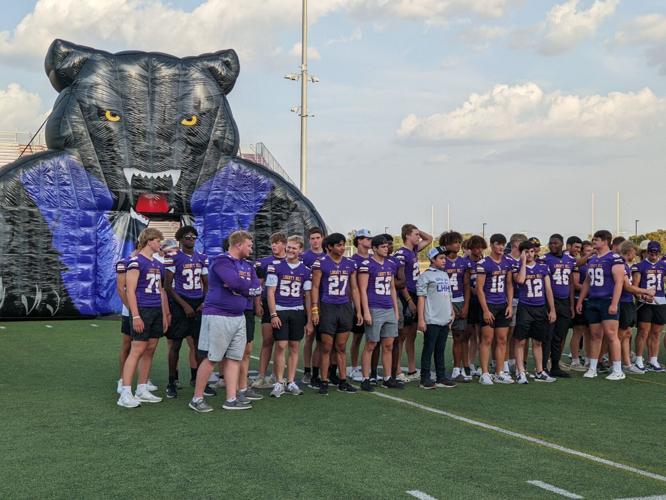 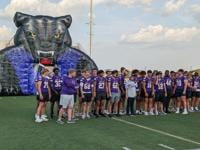 Members of the Liberty Hill football team are introduced to the crowd at “Meet the Panthers” on Friday night at Panther Stadium. 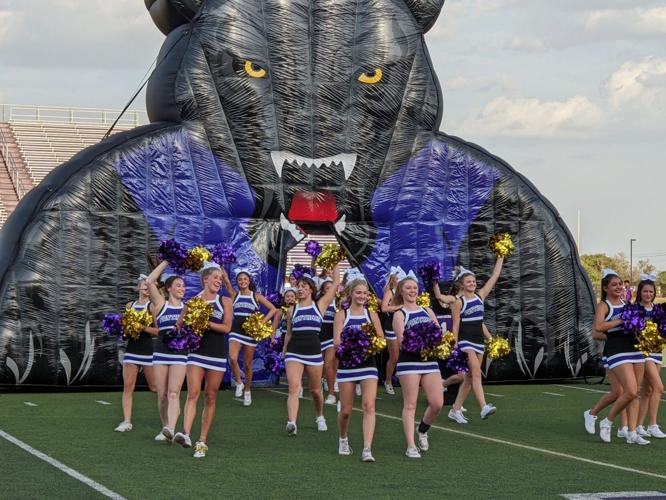 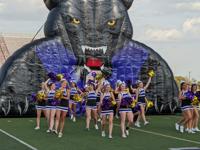 Liberty Hill's cheerleading squad helped fired up the crowd in support of the Panthers sports teams. 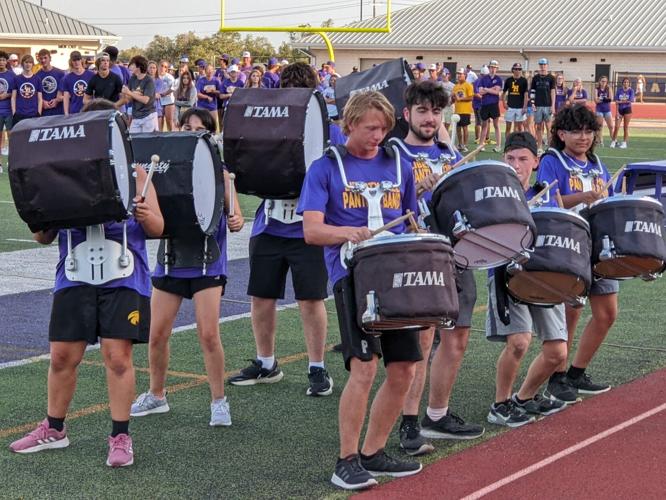 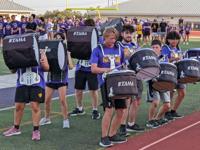 The Panther Band's drum line entertained those in attendance at “Meet the Panthers” on Friday night.

Members of the Liberty Hill football team are introduced to the crowd at “Meet the Panthers” on Friday night at Panther Stadium.

Liberty Hill's cheerleading squad helped fired up the crowd in support of the Panthers sports teams.

The Panther Band's drum line entertained those in attendance at “Meet the Panthers” on Friday night.

A mix of anticipation and excitement filled the steamy, early-evening air at Panther Stadium on Friday as the Purple-and-Gold faithful were formally introduced to the young men and women they'll be supporting all school year long at “Meet the Panthers.”

Once the gates opened, the crowd poured through and mingled among a host of team tents set up along the perimeter of the field before filing up into the newly-renovated grandstand for the festivities.

Greeting them was the football team's brand-new inflatable run-through facing the stands at the 50-yard line, a menacing black Panther ready to strike any and all opponents that dare to set foot on the home team's gridiron this season.

However, on this night, it wasn't growls, but smiles all around, as first through was an army of “Little Panthers” that was the first to try out the new stage entrance – local elementary-school children that got a taste of what it might be like to someday emulate their heroes.

After that, all of Liberty Hill's sports teams paraded through the opening from fall sports to winter to spring, as they were all introduced over the public-address system.

According to Liberty Hill High School principal Bryon Ellison, having all of the Panthers' teams participate this year – as opposed to in the past when only the fall sports were featured – was a way to get everyone on board to kick off the new school year.

“This year, we had the great idea to include all of our teams – baseball, softball, soccer and all the others – so it's just great,” said Ellison. “The more we can celebrate students, the better, so I love we're able to include our spring sports in this and have the community come out and meet them. It's great to have the little kids coming by wearing the uniforms and just real excited about including more students this year in the event.”

The Liberty Belles performed a new dance routine and the Panther Band's drum line provided the percussion, along with the Liberty Hill cheerleaders also getting in on the act, much to the crowd's delight.

Ellison – who spent over a decade at Class 6A Vista Ridge – highlighted the fact his new school has managed to remain relatively close-knit despite the rapid growth that continues to happen all around.

“It's all about community and Liberty Hill – that was one of the draws for me to come out here,” he said. “Because I love the community aspect and the small-town feel and how the entire community comes out and supports the school.”

Also on hand for the festivities was Liberty Hill Independent School District superintendent Steve Snell, along with members of the Board of Trustees, which further bolstered Ellison's enthusiasm on the evening.

“When you're in a big school district, sometimes those people don't come to these kinds of events,” said Ellison. “But when you have pretty much everybody from the central office here, school board members, parents of future Panthers – it's just an amazing event to see everybody come out and support the school.”