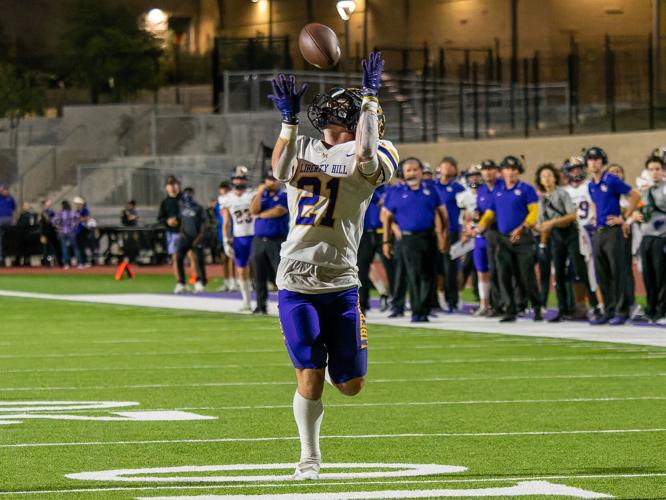 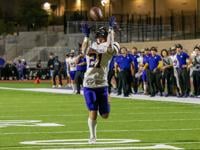 Liberty Hill's Noah Long (21) hauls in a 34-yard touchdown pass from Reese Vickers to open the scoring during the Panthers' 47-7 road victory over Pieper on Friday night. 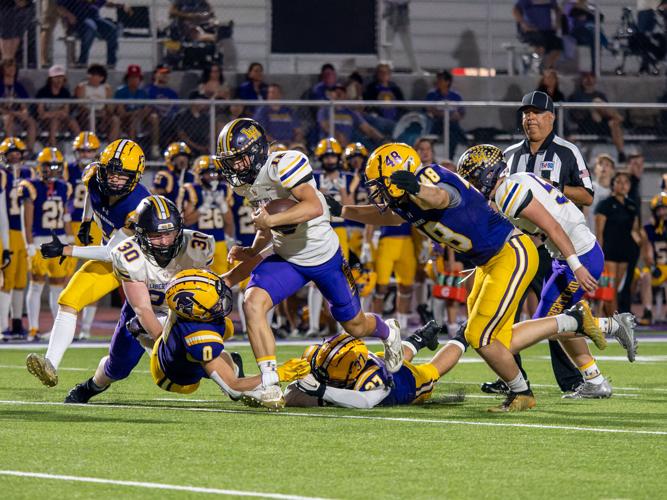 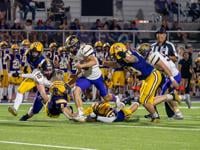 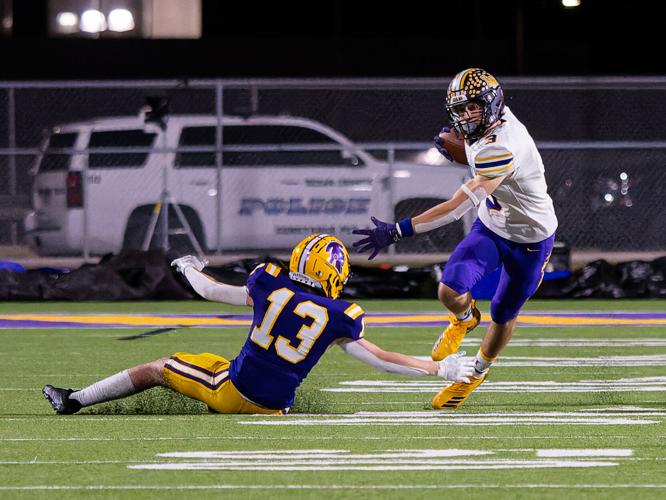 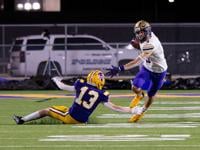 Liberty Hill's Noah Long (21) hauls in a 34-yard touchdown pass from Reese Vickers to open the scoring during the Panthers' 47-7 road victory over Pieper on Friday night.

In a battle of two schools that call purple and gold their colors on Friday night in suburban San Antonio, only one could emerge from the arena victorious.

Alas, it wasn't much of a battle at all, but much more like a brief skirmish and one in which Liberty Hill prevailed against Pieper by a score of 47-7.

To be fair, the Warriors – who are in their first season of varsity football after the brand-new school opened last year – acquitted themselves far better than many, more experienced sides have against the Panthers, but in the end, it was the usual for the Purple-and-Gold – the Liberty Hill version, that is.

Only a Pieper touchdown with 4:06 remaining in the fourth quarter spoiled the shutout in a contest that was firmly under control of the visitors throughout the proceedings.

Liberty Hill head coach Kent Walker said he and his team are ready to move on with their quest to return to the state championship game again this season now that the regular season has ended – despite still needing to make some adjustments.

“We just have to continue to get better,” he said. “I thought at times tonight, we played a little sloppy – we let them get some things going on offense early, but our kids stepped up and we had a good night overall.”

By land, by air

Noah Long scored the first two touchdowns of the contest on an unseasonably, warm, blustery evening at Warrior Stadium – the first of which came on a 34-yard pass from quarterback Reese Vickers on a 4th-and-12 play from the Pieper 34-yard-line after the home side had taken the opening kickoff and driven 11 plays and 56 yards before Carson Hollen recovered a Warriors fumble, which put the Panthers offense in business near midfield.

Long scored again to make it 14-0 on a 13-yard scamper, which was how the opening period ended on the scoreboard after Liberty Hill kicker Connor Hawkins missed a 49-yard field-goal attempt.

Pieper junior quarterback Jake Stratchan had some early success moving the Warriors offense, but on the first possession of the second quarter after driving the ball to the Liberty Hill 24, Pieper passed on a field goal and went for it on 4th-and-8.

However, protection in the pocket broke down as Stratchan looked for a receiver downfield and he was sacked by senior defensive end Wyatt Sprinkle, with help from Hollen on the play.

On the next series, it only took two plays for Ben Carter to break loose on one of the junior fullback's trademark long runs right up the middle for a 61-yard touchdown to increase the lead to 21-0.

Senior offensive lineman Greg Watkins said Carter – despite his status as an underclassman – stepped up in a big way.

“Ben showed a lot of leadership tonight,” he said. “He got us going when we needed it.”

As far as what it's like to block for a back like Carter, who sprints off to glory while his lineman are left behind in his wake, Watkins said he tries to make sure that doesn't happen.

“I always race him to the end zone on those plays,” he said. “Tonight, I almost beat him.”

Jaxson Hines scored from five yards out before Hawkins redeemed himself for his earlier miss with a 34-yard field goal to close out the first half with the score 31-0.

The pace of the game slowed down considerably once the second half got underway, with only Hawkins' second field goal of the night from 24 yards out at the end of a 14-play, 79-yard drive denting the scoreboard and it was 34-0 entering the final 12 minutes.

Entering the game, Hawkins only had one field-goal attempt all season before hitting on 2-of-3 attempts on a night when swirling winds made place-kicking a tricky proposition.

Walker said it was part of the plan to get Hawkins some placements with the playoffs just a week away.

“Yes, that was big tonight,” he said. “We wanted to get Connor out there and get a couple of field goals and it worked out well.”

As lightning lit up the sky in the distance, the Warriors offense failed to match Mother Nature's explosiveness, as time and again, Pieper passes fell incomplete before Stratchan finally connected on one to set up a one-yard run by sophomore Samuel Campos to supply the only points the home team could muster on the evening.

Finally, Panthers junior running back Luke Miller closed out the scoring with a 50-yard sprint on which it seemed as if he was still accelerating when he crossed the goal line.

Walker said it's always good to be able to get players like Miller – who had five carries for 66 yards – and senior Zach Jacobs (two carries, eight yards) playing time under the lights as a reward for what they do all week long.

“Our kids work extremely hard and our offseason is pretty tough,” he said. “There were a lot of seniors that got to play quite a but tonight that don't usually get to play as much – I really enjoy that – it brings a smile to my face.”

Long led Liberty Hill with 14 carries for 177 yards and with one touchdown each running and receiving, while Carter ran seven times for 135 yards and a score, with Hines collecting 66 yards on seven attempts and a touchdown.

In all, the Panthers rushed for 484 yards in the contest.

Liberty Hill (9-1, 6-0) had already clinched its third straight district title with last week's 61-7 win over Bastrop and will next face Highlands (5-5, 5-4) of San Antonio – which finished fourth in District 14 next Friday at home in the opening round of the Class 5A Division II state playoffs.

Walker said it's high time he derived a bit more gratification from victories such as Friday night's.